Time is running out !

Both our U-12 Teams have played their final games in the U-12 summer league, we didn’t qualify for the semi-final stages however both teams gave excellent displays throughout the league and look forward to the championship later in the year.

Exciting News for our U-12’s this week as we have been chosen to play in Caman to Croker in July, this will be a momentous occasion for the girls and the club.

U-10’s will travel to Cashel this week to play a challenge game & our U-8’s travel to Cahir.

Well done to Katie Ryan who represented the club in the county U-16 long puck held in the Ragg recently.

Congratulations to Dearbhla Morrissey, Alison Connolly & Megan Quigley who were part of the County U-13 development squad who took part in a blitz in Mallow on Sunday last

Congratulations to Dearbhla Morrissey, Alison Connolly & Megan Quigley who were part of the County U-13 development squad who took part in a blitz in Mallow on Sunday last 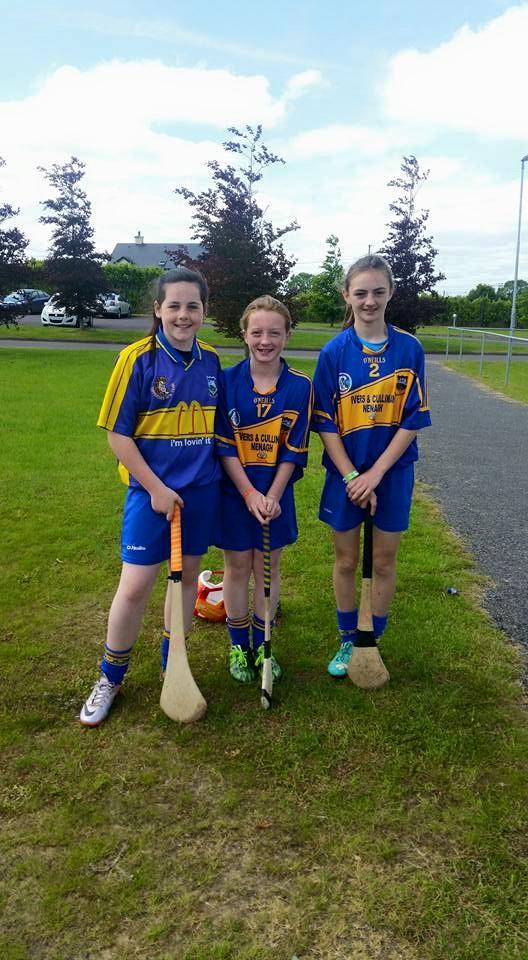 U-14 girls:
Congrats to our U-14 girls who made it through to the county B football final after overcoming a dogged Slievenamon in their semi final replay Monday night. Fethard started the quicker racing into a 1-3 to 0-1 lead after 10 minutes. The reminder of the half however was dominated by their opponents who scored 2-2 without reply to lead 2-3 to 1-3 at half time. The second half was to prove a different story as Fethard soaked up the pressure with the keeper and defence snuffing out every attack and the midfield and forwards marauding upfield, the girls were to outscore their opponents by 3-4 to 0-3. There was tremendous effort put in by every girl as they ran themselves into the ground, throwing themselves into every tackle and playing some fantastic football and they are now rewarded with a county final against Brian Borus on Saturday 20th in New Inn at 7pm. Well done girls and best of luck in the final.

Community Games U-14 Update. Waterford have pulled out of the competition so the draw was redone. We have now qualified for the semi finals in UL on july 4th so game Tuesday is off.
We will play the winners of Cork V Limerick in the semis.

U-6/ U-8 mix and U-10s will compete in blitz in Rockwell on Saturday at 12.30 to 2.30. Girls to be there for 12.10. Please let management know if your child is available.
There will be no training for these age groups on Friday.

Intercounty Football :
Congrats to Lucy Spillane of our U-14s who lined out for her county in their recent all Ireland semi final win over Longford. Lucy has established herself as a stalwart in the team for both club and county and hopefully she can add an all Ireland medal to her collection when they take on Donegal in the final. Best of luck Lucy and all the tipp girls.

Best of luck also to Kate Davey who is part of the Tipp minor panel who will play Waterford in the munster final in 2 weeks. Best of luck kate and all the tipp panel.

Best of luck to Aimee Pollard who will be part of the Tipp panel who will play Waterford in the Munster Intermediate Championship in Fraher Field, Dungarvan on Saturday, June 20th at 4.30pm. Best of luck Aimee and all the Tipp ladies.

This weeks lotto is €11,800 click on the picture below for full details.